It came as a tiny, niggly thought at the back of my mind this morning.  I couldn’t quite put my finger on it.  Nothing had changed and yet something was different…

For a start, I was sitting eating my porridge at the table, alone, reading an article from the terrific blog, A Cup Of Jo.  I finished my breakfast.  I finished the article.  Ta DAH!  Somehow we had gotten to the stage where I could lose myself in something relatively normal, but very lovely.  Children fed, nappies changed, one half dressed, husband left for work, I had done my usual ‘now’s my chance’ grab at breakfast.  More often than not it’s done while vaguely playing with baby girl as the toddler slobbers all over little, begged spoons of my porridge.  Today?  Both were amusing themselves – toddler was caught up with some toys and baby girl, well she’s nine months now.  And, as everyone knows, at nine months everything changes… 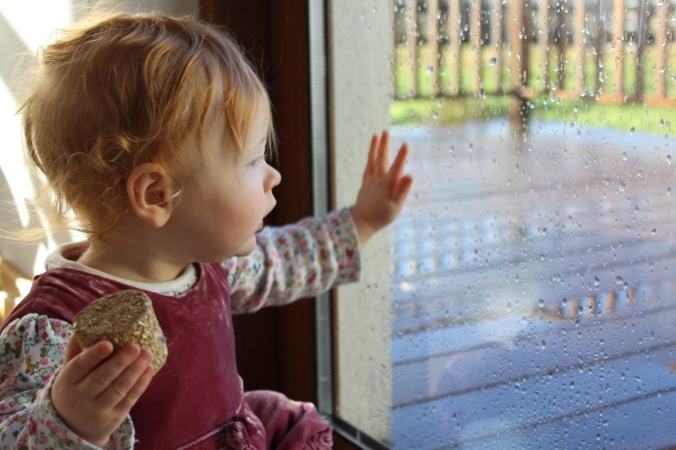 OK, I’m being dramatic.  It was a good friend first said it to me; “It takes nine months – don’t expect anything any sooner.   Nine months to feel any bit like the person you were.  Nine months until you start to feel, you know, a little bit separate”.   As a new mother you’re set up to expect huge advancements at certain, set stages.  First it’s waiting for the magical six-week mark.  People talk of the change (and sleep) it brings.  It’s the first landmark age when baby will be sleeping and you will have kicked your now-spiralling-out-of-control biscuit-scoffing habit.  About two days before I hit that target with my first baby, my aunt burst my much-anticipated bubble; “Six weeks?  I never noticed any real change in mine until we hit three months.  Up until then it’s all very (pause) hard (pause) work”.  I won’t lie, I was devastated.  Three months, in first baby time, is the equivalent to 4.5 years hard labour.  In retrospect she was being kind – she realigned my expectations, and deep hope, that my life would somehow revert to being vaguely within my control again.  Ha!

However, progress is progress and before you know it you are making some and getting places.  I’m not saying that baby necessarily sleeps for longer or feeds for shorter.  I’m certainly not saying that you are back in your old jeans, signing up for an evening class or redecorating the house (Instagram – you lie).  What I am saying is that little chinks of light start to shine through.  You get into the swing of things, you find a rhythm.  Not in every minute of every day, but you might start to see a few minutes come together on, say, every second day.  Until one day, and it may well be around that nine month mark, you suddenly look up from a self-eaten, empty cereal bowl and a completely read article.  Like a point scored by a trailing team from the 60 yard line just before half time – we have a turning point folks!

Of course the baby coming into her own has a knock on effect.  Quite distractedly I had wandered into this particular blog’s ‘Relationship’ section and I was enjoying an article entitled ‘How Do You Know Your Partner Is The One?’ – a sweet piece about the reasons we fall in love.  I was having such a good time,  before I knew it, I had clicked into ‘How To Keep The Sparks Alive’.

Now, I’m not saying I needed any tips on keeping the flame alive (me?  You must be joking!) and if I didn’t already know my partner was ‘the one’, well, we might be in more than a little bit of trouble.  No, it was something else.  The point was, the article I read wasn’t about how to get more vegetables into my childrens’ dinners, or how to delay the baby’s nap time by 30 minutes or even about how to stop the toddler’s supermarket tantrums.  I was beginning to look outwards again.  I had somehow, second-time-round, reached that magical milestone where Mammy-brain recedes ever-so-slightly and just enough to allow you to start thinking of other things again – like reading a book, for pleasure, or maybe planning a night out with the girls, or reconnecting with your other half. 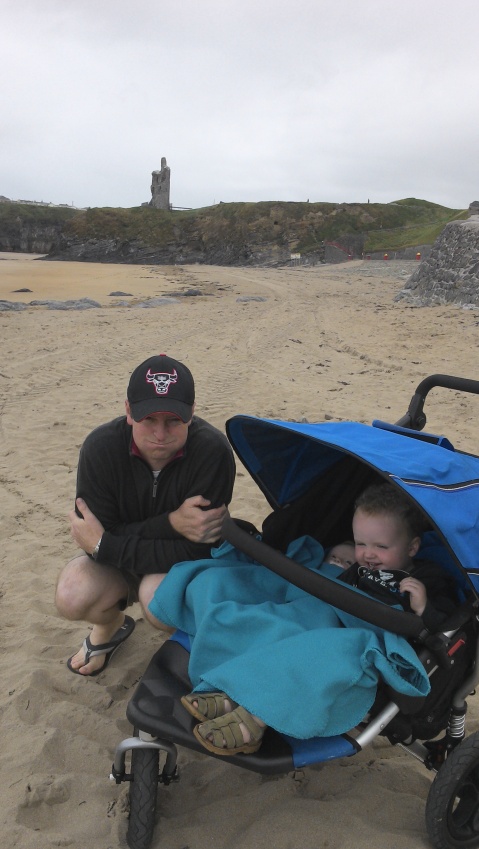 Here’s to the Daddies – pretending to have fun – everywhere

They have it hard these days, the modern Daddies.  Most are trying their best to support you, while being active and involved fathers as they also keep their own lives on somewhat of an even keel.  After all, they don’t really get the breaks or the credit us mothers get for the broken sleep, the emotional upheaval, the sheer hard-work involved in nudging little people through their first year of life.  If you’re lucky, like I am, they’ll be doing their best for everyone else without complaint or expectation that things might ever revert to even slightly resembling the life they once lived.  They may even be wondering how their once lovely lives went spectacularly wrong…

So don’t worry darling!  I’ve got you and ‘us’ in my mind’s eye.  I’m breaking out of my baby cocoon (ever so slowly), I’m kicking off these baby shackles (well, kind of) and I’m starting to look outwards again.  One, tiny peek at a time.

Roll on Valentine’s I say!

If you’re feeling a bit mushy and are interested to check out the article I read, you can find it by clicking on the title;  How Do You Know Your Partner Is The One?