The small fella needed to renew his passport.  A true sign of the times when you’re not even four and you’re already on your second piece of international documentation.  The photos made for a fun comparison – our little man, more ‘himself’ now with his curly head and emerging freckles and still-little nose.  Much less the squidgy newborn I remember laying on a white board so that Anne Mac could work her magic to get the precise shot demanded by officialdom.  No mean feat!

I never expected it all to be so… emotional.  A few years ago, a particularly (and fabulously) plain-speaking work colleague had said that she felt the act of giving birth had somehow caused a reconfiguration whereby her kidneys had been connected directly to her tear ducts.  I get it now.  You feel it all – news headlines, plea-based advertising, baby’s first steps – and you understand why people use the words ‘overflowing’ and bursting’ to describe the emotional reflexes of the heart, as you teeter on the verge of tears at a near constant rate.  On the brink is my new normal.

It’s the burden that can only be the new parent’s load, as you unwittingly wake to find you now carry the weight of all the hurt and loss and cruelty of the world on your back.

And there is this constant, lingering sense of grief.  It’s come to live with me as my constant companion, shadowing it’s close ally joy in this weird juxtaposition whereby each happy milestone for your child becomes an unwitting lament that time and life are gradually, always, moving and passing by – never to repeat, never to return.  The bitter-sweet nature of motherhood makes my throat throb, my heart ache and my body want to  curl up and give into the sadness.  Just once in a while.  Because you only want them to grow, but it’s difficult not to also grieve that growing.  And so it is that life now becomes a process of living and grieving all rolled into one.  Moving forward, while always, painfully, saying a regretful goodbye to what’s being left behind to memory’s fickle file.

When my first was born, so many people told me how fast it would go, to enjoy it, to savour it – they said it was the most special of times.  But I already knew it – I felt it.  I wanted to grab these people by the jacket, violently shake them and shout ‘I KNOW’ in their faces.  (On mature reflection some of this can also be attributed to the dreaded hormones…)

Recently, for the first time ever, I ordered a coffee at our local soft play centre and got to drink it.  Hot.  On my own.  My two darlings were gone – up and into the play-maze with no whinging or ‘Come with me Mammy’ or ‘Lift me up Mammy’.  They squealed and laughed together in what has become a little club that can now survive quite satisfactorily for at least 11-minute stretches without me.  They had moved onto a new stage (oh the betrayal) – a next stage (they’re leaving me behind).  I slurped my flat white over a large lump in my throat, tears spilling down my face, filled with regret that I hadn’t appreciated their needing me – not one bit.  Silly Mammy.

A while back a friend guffawed out loud while reading a magazine article – quoting an interviewee who said the baby years go by too quickly and that she knew she would one day look back and know they were some of the best days of her life.  My pal found this both hilarious and insane; ‘She’s crazy, they’re the worst years.  It only gets better.  Christ, the baby-stage is hellish’.

I quickly rubbed away a big, fat tear.  She would have a low threshold for such nonsense.

We’re all made differently – our children are, and so too is each and every parent who brings their own unique personality, love and approach to the bond which is that of mother/father and child.  I just happen to be one of the sappy-can’t-handle-their-childhoods-moving-so-fast ones.  Who’d have thought it? 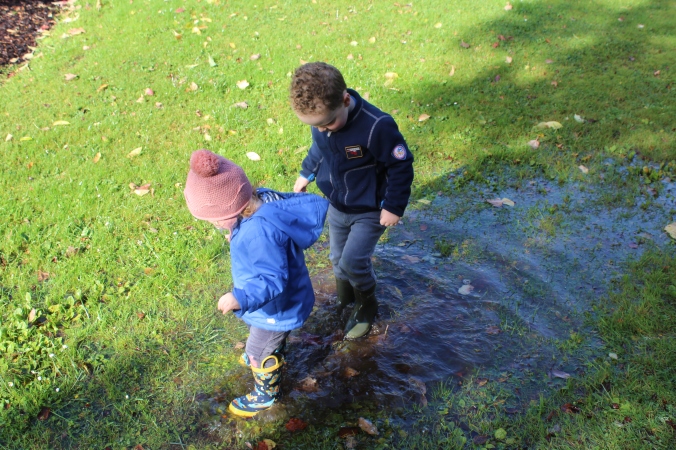 Making their own fun.  The years go by too quickly…  For sappy old me at any rate

One thought on “This Constant, Lingering Sense of Grief”