Halloween is one of those events that, for me, definitely has a ‘then and now’ aspect to it.

Then Halloween was Barm Brack.  Literally.  Just barm brack and nothing else.  Well maybe a few fun games in school and monkey nuts… but what with all the allergies doing the rounds now (scarier than anything Halloween could possibly throw at you) these simple seasonal pleasures seem to have been replaced with, oh, I don’t know – a whole new world where Halloween is EVERYTHING?

The barm brack had it’s pros and cons – it was cake mid-week, which was always welcome in our house.  But if you got the stick it meant that you would marry someone who would beat you.  Or the pea…  The pea promised infinite poverty.  I mean, you could get the ring which meant that matrimony was imminent – something to be prized even aged nine – but my sister Linda always (and I mean ALWAYS) got the ring, so basically it was just a slice of misery and disappointment with lots of fruit.  But then anything different was welcome on a dark, grim evening in the 1980s…

Then, trick or treating was only just getting a foot-hold in Ireland – inspired by American film and TV shows where kids seemed to gather tonnes of sugary loot from large appropriately-spooky mansions.  Our version was different.  We only had five other houses on our small country road and most of our neighbours were quite elderly so they saw our trick or treating escapades as an opportunity to see how much we’d grown and how cute the small ones looked all dressed up.  I think they may have thought trick or treating to be a version of what the Wren boys do at Christmas because they always asked for a bar of a song.  And even if we mustered the confidence to sing a verse of something, they’d reward us with the dreaded monkey nuts or maybe oranges or apples or – a step up for us – cash.  Ever try splitting a pound note six ways?

We always felt our take-home-haul might have improved if our costumes had been up to scratch.  Masks were everything.  You would probably get a mask at Halloween, and apart from that,  you had few dress-up choices.  There was ‘Jack O’Lantern’ which was wearing your Dad’s clothes with coal / appropriate mask on your face or there was wearing a black plastic bag with coal / appropriate mask on your face.  I had once played a Snowman in a school concert for which I had a broom purchased for me so I always had a bit of an advantage on the witch front, but not much.  There was also the ‘Mummy’ option, but our mother was too environmentally-conscientious to allow us to lash on the toilet roll required.  And, in any case, it never lasted the Irish weather and so was never really worth the effort. 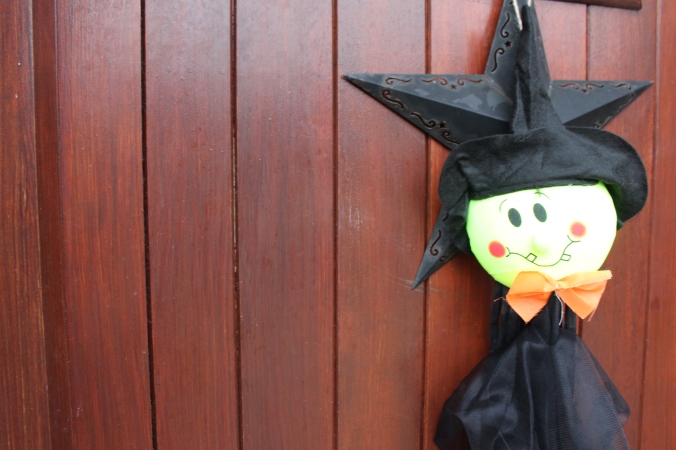 Now there are pumpkins (the turnip growers of Ireland must curse them) and decorations and ‘spooky events’ to attend the length and breadth of the country and…  I’m quite liking it all.  I can’t quite put my finger on why, but I think it’s something about the time of year, the non-gift-centric nature of Halloween, the playfulness of it – the non-pressure of a holiday that’s about eating nice things and having fun.  The kids love it and if they’re happy, I’m happy.

All these years later there’s just one element that still has me in the horrors.  The costume thing.  Nobody wants to fork out for a new outfit for their little darlings every year or even worse – actually make one for them!  So there needs to be an amnesty.  A Halloween costume amnesty whereby old costumes are surrendered into a local ‘pile’ from which you pull another one out.  Less plastic (so on-trend), less cost (always a vote-puller) and less clogging up of my precious wardrobe space, which would really give you a fright.

That would really be the icing on the… barm brack.

One thought on “The Icing On The… Barm Brack”