It’s Sunday today.  Can you tell?  Does it matter?  The term on everyone’s lips is ‘groundhog day’, and it’s going to be groundhog day all next week and most likely many weeks for the foreseeable.

It’s like we’ve reverted to simpler times.  In the late 1970s / early 1980s, my days were pretty much all the same really.  They were spent at home with Mam and my younger sisters until I went to playschool aged four and life took on some sort of weekday versus weekend shape.  I suppose; it’s all a bit of a blur now – like this time will seem in a few years.  The weekends were marked by the fact that my father didn’t go to work.  And Sundays were not just different, they were quite special.  Dad would be up early to bring neighbours of ours to first mass and we usually accompanied him to give Mam a bit of a lie-in, cruising around the parish in onesies with rice-krispie-encrusted faces.  In between the start and end of mass we’d return home to eat toast and get dressed in order to collect everyone.  Then we’d spin down to Granny’s for the weekly Sunday fry-up.

On top of this routine, and wearing our nice clothes, Sunday mornings were marked by Sunday morning radio.  Sundays were solidly Sunday Miscellany‘s poems and prose and music meandering through the morning; the gorgeous, familiar voice of Ciarán Mac Mathúna with his choice of traditional tunes; and a mid-morning switch to 96fm for Oldies & Irish.  Radio was and still is big at home – and when I say big, I mean huge.  We don’t sit for lunch, we forage off the counter while chatting and competing for air space with Áine Lawlor on the News at One or The Eagles on RTÉ Gold.  Although pretty well scattered, many from my family will participate in a ‘group-listen’ to Ronan Collins on a given weekday, What’s Apping commentary or prompts to turn the radio on when certain songs are played. It’s a family habit, and one which ensures the radio provides the soundtrack to my homelife now.

So, obviously, the radio went on first thing this morning when I took my turn to get up with the early risers.  (We’ve fallen into a pandemic pattern of one gets up, one rolls over.  A routine of beauty really…).  Sunday Miscellaney comes on.  Ahhh.  Breathe…  Switch on Sunday-mode – whatever that looks like in this near-global lock-down.

I’m finding the constant nature of the radio a great escape and solace and source of community at the moment.  There’s nothing like having a bop around the kitchen or hearing stories told with great humanity or comedy or kindness to help you feel connected and soothed or, sometimes better still, distracted in such a testing time.  It’s a bit of a lifeline. 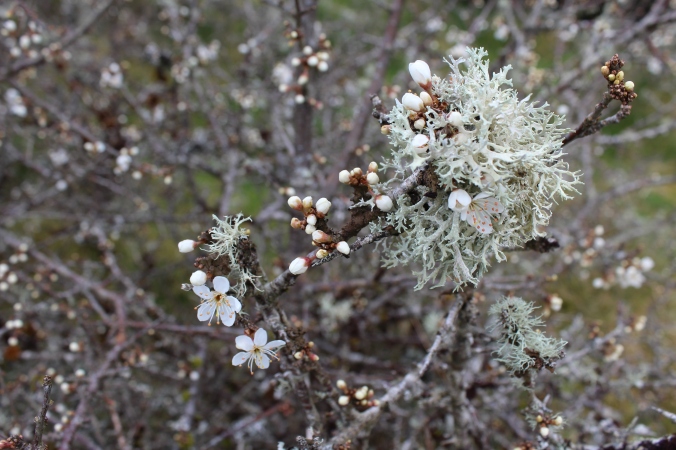 The gorgeous blackthorn.  Proving to us that Spring is here and there is hope

Like everyone else, our life has slowed down considerably.  The nature of Alan’s work is such that it’s gone relatively quiet and my daily deadlines of a drop-off at 9.15 and a pick-up at 2pm for the five year old are out the door.  Slow is how we quite like to live our life anyway.  It’s why I stay at home with the kids, for now at least, and where we live happens to help too.  We live near many like-minded people.  Burren life is not for those who enjoy a rich night life or starting out on the corporate ladder (though on-line working is helping the cause) or might miss conveniences like take-aways or corner shops for a forgotten litre of milk or a snazzy gym. The idea of slow-living isn’t for everyone, but it’s certainly a reality for many in this neck of the country.  Here there is more opportunity to feel closer to nature, to direct life at your own pace and forge a simpler lifestyle.  Heaven for some.  Slightly hellish for others.  And that is simply because people are, thankfully, all different.

Right now, however, absolutely everyone is having to take life down a gear or four with slow living being enforced across the nation.  And although it’s not everyone’s cup of tea, we are all being bashed with What’s App memes about the world taking a breath and restoring itself, and poems on instagram about how when this is all over everyone will seek a simpler life and want to live differently, free of consumer pressures and ties – i.e., no longer be that into consuming €15 jeggings.  But I just can’t see it.  Apart from more senior citizens being dingers at on-line conference calls, I really don’t think very much will fundamentally change.  It would certainly be great for our planet, but jam-packed weekends, micro-managed kids’ timetables and choosing Dundrum over Glendalough are cultural norms which will all return.  It’s all too ingrained…  I think.

On last Sunday, following breakfast, a small wander outside, fights, tears, falls and spills, it was time for Miriam Meets.  I cocked an ear when Colm Toibín’s name was mentioned – the pillar of sense and calm I needed that Sunday.  Miriam put it to him that this time would bring about big-scale societal change, but Colm hit the nail on the head.  He referred to when he had cancer and he was going through treatment.  Did it bring about a change in his perspective?  A major shift in his values?  No.  All he wanted was for things to go back to normal.

I think, no matter how we usually live our lives, we all just want things to go back to normal.

If you’re enjoying this slow time, brilliant.  If you’re finding it awful, that’s understandable too.  Either way, sometime, we will all be back to our version of normal.  The days of the week will feel different again and Covid 19, that constant groundhog day, will be a mere dot in our collective memory.

In time, John Bowman will devote his Radio 1 archive show to a look back at the dreaded pandemic and we’ll marvel at the soundbites from frightened citizens, decimated businesses and stoic politicians.  No doubt, I’ll be listening in.  I’m an awful creature of habit.