Oh sweet divine.  I ushered the pup into a stable and turned back to survey the scene out of the corner of my eye.

He was definitely dead anyway, lying on his back, head tilted with tiny teeth bared, his little front paws tucked into his chest as if waiting for a manicure to dry.  Poor thing.  A rat is, well, a rat, but I find it hard not to pass a moment of sorrow for any soul that’s flown.  It’s a creature-solidarity thing.  I winced at the fact he’d met a grizzly end – I’m no Jessica Fletcher, but flattened in a gateway pointed to a hit-and-run.  I also winced at the thought of my having to take care of the mortal remains.

Now I know what some of you are thinking – why does any woman get married if not to have someone to call on when they find a dead rat in the yard?  Am I right?  Well, that might have cut it in the 90s, maybe even the noughties, but no more.  I’m not fond of shovelling away small furry invaders, but I hear my husband say ‘me too’.  In 2020, all’s fair in love and pest control.

I read a piece in last week’s Sunday Times Style Magazine, by Matthew Fray whose wife divorced him because he left dishes by the sink.  A bit of a cut-throat decision you might think, but the piece documents how after 13 years of being together, nine married and with a four-year-old son, his wife decided she had had enough of being a caretaker of two.  He had thought he was doing a great job of ‘helping’ her with the housework stuff – he’d often ask if anything needed to be done, even swept the floor unprompted.  It wasn’t until his relationship imploded and he became a co-parent that he woke up to the workload of emotional labour and the realisation that his wife might have wanted an actual partner for a husband.  Unfortunately for all involved, his lightbulb moment came too late.

Modelling is important – and the writer talks about this also.  He and a whole lot of us grew up with mothers who stoically and automatically did all the jobs at home, so there can definitely be a massive learning curve involved which you either undertake or dice with divorce.  It’s not just the lads, however, that soaked up all that modelling.  Us ladies were also influenced and often find ourselves being territorial when it comes to home-stuff.  It’s easy to feel threatened when he picks up the tea towel and criticised when he takes out the hoover.  Who doesn’t have a friend who likes to keep a really neat house and whose other half just can’t seem to do things exactly her way?  He, hold onto your hat now, puts the mugs in the wrong order on the shelf and doesn’t wipe down the sink properly.  If genuine change is sought there has to be an acknowledgement that it is a shared home and both of you has the right to do the chores as you wish.  If no-one else can put the mugs away properly – guess what?  You end up doing it yourself.  Forever.  So an element of surrender is required.  Afterall – it’s not a partnership if one is intent on being the boss.  Let it go.  And if you can’t let it go, maybe think about getting a cleaner.

Some sense of equality is the goal.

Look, as good and willing as your partner may be, if you happen to be at home full-time you will naturally pick up the brunt of the drudgery that is housework.  But lockdown has definitely brought me some respite in that respect.  With zero commuting time and a bit of flexibility during the day, it’s possible for us to divide out more of the cooking and some cleaning between us during the week and I get a chance to get away from the kids to do some of the outside stuff – to walk the dog, get a bit of weeding done etc.  Overall, there are a couple of things in my favour here – I moved into his house, so the territorial thing was never there, and also – I don’t care admitting I’m not all that fussy.  I certainly don’t care to control the domestic side of our lives – something I’ve had to coax myself to acknowledge as it goes against all the conditioning.  The last few months have been freeing.

Anyone smell a rat?

I was on my way back to the house – but I already knew what I had to do.  Fair is fair.

He would have done it if I really, really wanted him to, but why should he?  This was a time for big girl pants.  And what is life if not a constant, uncomfortable evolution towards a greater self?

I was suddenly determined.  ‘I’ll get rid of him. I’m going to do it.’  A shot of adrenalin flushed through me.

‘You might want to use the hay fork,’ he called after me, ‘better than the shovel to catch him up.’

I barely heard him with my cape flapping in the wind. 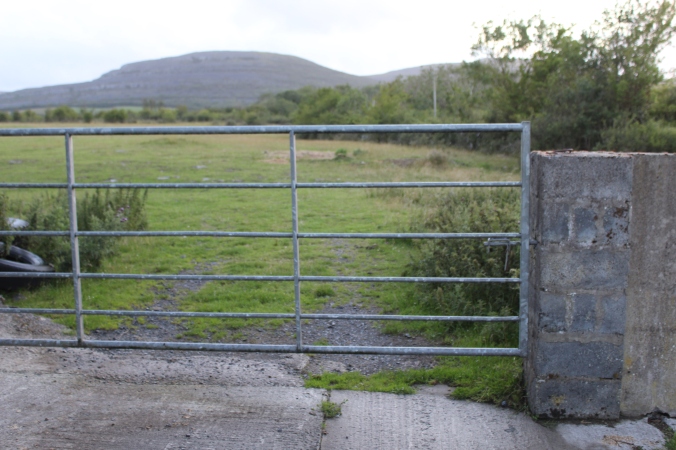 The scene of the crime – the yard gate