I lost my phone recently.  I mean ‘lost’ in the RIP sense – I’m that sensitive about it.  Cliché I know, it fell out of my back pocket and into the loo.  It was only in there for, like, two seconds; but that’s all it took.  Several hundred spells of holding down the power button, three days bathing it in a bowl of rice and at least two hours of googling ‘how to resuscitate a phone that has fallen down the toilet’ and I had to accept that my phone was gone…  forever.

You learn something from every experience, and all that.  Firstly that there are two groups of people – those who know the ‘put the phone in a bowl of rice’ trick, and those who don’t.  People in group A will have a personal(ish) story of how this trick miraculously worked before on the phone of someone they know (or don’t, really), saving them a fortune and from a nervous breakdown.   This group of know-it-alls also seem to back everything up – phone numbers, photographs, etc.  If you hadn’t already guessed it I’m firmly in group B – i.e., absolutely, technically clueless.  It was a steep learning curve.  Still is, with my husband most recently, gently taking me to task over my nonchalant attitude to laptop security (why would a global cyber criminal be bothered with little old me?)…  And last night he patiently told me exactly where I could purchase a, what do you call it, hard drive(?) to back all my important virtual files up.  On my list Al, cross my heart.

We have a room at the end of our house that’s crammed full of stuff and, probably like a lot of people, if the house burned down we wouldn’t miss 92% of what’s in there.  Stuff isn’t really important.  OK, you might have some sentimental bits and a few useful bobs but a lot of it is inconsequential, forgettable yet can’t-throw-it-out rubbish.  But there’s a big basket of photos down there that I would hate to lose.  And the same with my phone.

The phone wasn’t very swish and I’m not one for needing the latest fandangly gadget anyway, but it had a lot of photos on it.  Recent photos, older ones and, more importantly, some real golden oldies (in cyber terms that’s circa 2009/2010 – ancient!).  Not too many, but they were there – of my old home, out with friends, living my single-girl life on a hill in West Clare with my two dogs.  I’m really hoping those pics turn up somewhere because it was a very special, transformative time in my life and photos are probably the best memento you can have.  Losing the photos made me think quite a lot about something the writer Nuala O’Faolain said in a radio interview when talking about death.  She asked where all the knowledge and memories go?  Where would her specific knowledge of opera go, her enjoyment of new curtains for a small window she had bought recently, her ability to reel off favourite lines of poetry, plays and novels?  Those feelings, that knowledge – where does it all go when you’re no longer there? I thought it was an immense question and it made me so sad at the time and when I’ve recalled it since.  I recalled it when I lost these photos. 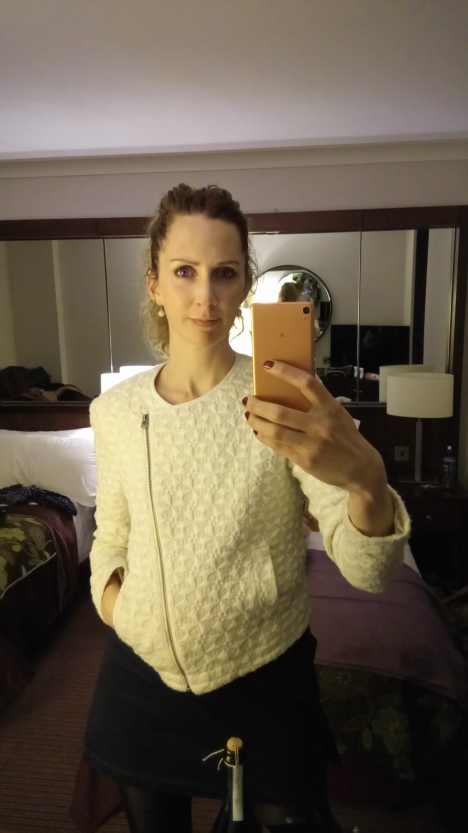 Captured In A Photograph – Me, At This Point In Time

If you’re moving at all, it’s forward.  And that’s all good.  But some stages in life are particularly important ones.   If photos of specific moments are gone – photos of the way the light fell in the little hall and of long, happily-silent dog walks and bits done in the garden – then the details that make up those moments are lost.  Without the little signposts that were those photos – me wearing certain favourite clothes, drinking out of specific mugs on a stone bench hobbled together by my Dad – then my brain’s recording of that time gets grainy and I slowly, gradually, quietly lose the ability to re-feel how I felt on an ordinary day back then, before I was the person I now am.  Left to rely solely on the whims of memory, I’m afraid that all the experiences that went along with that time in my life will slowly fade away.  I will forget and the moments will disappear forever.  And I don’t want them to.

I’ll be forty in August.  Jaynie!  And the last few years in particular have moved fast.  Nobody has a tonne of time to look back and reflect.  But flicking through old photos, however infrequently you might do it, is a way of reaching out to a different you in a different time doing different stuff.  Looking back you can laugh and cry – you can give yourself a little virtual hug, a small thumbs up.  Not literally you understand, just, you know, a small show of solidarity from the current you to the past you.  “Keep going – you’re doing great.  Enjoy it.  It’ll all be grand”.

Did it all really happen?

All now just pictures in my mind…

Right.  Can anyone direct me to the nearest Curry’s PC World please?

Fun to watch:  The ‘back-up’ saga reminded me of this clip from HBO’s Sex & The City (click on the title to play) – Did you back up your data? “Ummm I don’t do that”

2 thoughts on “Before I Was The Person I Now Am”