I’m not the world’s biggest fan of going to the beach.  I’m not a swimmer and even if I was, what body was created to tolerate the excruciating cold of any water that manages to defrost enough to lap against the Irish coastline?  Sand is a curse, wind factor abominable and outlook for sunshine?  Dismal.

Having said that, a lot of Irish people live within a reasonable spin of a beach or strand and children love it.  I put this passion for going to the beach down to their as-yet-uncrushed sense of optimism.  That, and they don’t have to do the organising – they just show up.  They present themselves to the beach, it chews them up, it spits them out and  they leave wanting to do it all over again.  When anyone cracks the code on how kids think, PLEASE contact me.

Well, I for one have discovered a way to tackle the beach – to tackle life in general, in fact – with small children.  Surrender to it.  Surrender to the inevitability that it will be messy, it will be exhausting, there will be tears.  They will get wet, they will fight, the baby will eat U(N)FOs (unidentified non-food objects).   You will lose the will to carry on… but carry on you must.  Because you’re the grown-up here and, let’s be honest, you brought this on yourself.  All you need to believe is that you can do it.

I did it myself today.  I could feel the onset of a twitch from looking around my kitchen which looked like we had been broken into by a group of tearaway teenagers specifically instructed to ‘wreck the gaff’.  I suggested we go for a walk, the toddler suggested we go to the beach; “With lotsa toys, and crackers, and hummus, and nuts.  Let’s go digging!”.  His little eyes glazed over as he dived into his lovely daydream, headfirst.  The momentum was with him, I decided to gracefully surrender, we went to the beach.

I’m a quick packer-uper and I no longer really care how I present outside of the house.  (If I remember to wear a bra it’s a good day – that will give you an idea of the level I’m currently at).  The only thing that scuppers the exiting is the toddler’s aversion to putting on his shorts, leaving his toys, getting into the car – co-operation in general is not his strong point.  “We’re going to the beach” – I see him refocusing – “So we need to put on your shoes” – I lose him again, and he runs screaming up the stairs, making me think that a skewer in the eyeball might be less painful than this current negotiation.

But we made it out and there.  And, because God enjoys a good laugh, the sun actually shone.  We went to Traught, on the Ballyvaughan side of Kinvara, and it was absolutely gorgeous, ridiculously lovely, with the water like a still pool and white powder-puff clouds floating serenely across a bright blue sky.  Officially the toddler’s best idea to date.

While the small ones were gadding about on the sand a woman came down to swim and we got chatting.  She had been ill some time back and a friend had recommended the healing magic of the cold, sea water.  And so, after 17 years of living near Traught beach, she had literally taken the plunge and started to swim, maybe four times a week, and never looked back.

“Ah it’s great alright.  You don’t always feel like going in, but you feel great coming out.  It’s great for the blood circulation and it’s a bit of mindfulness – you know…”, she nodded towards the two small ones – one with wellies overflowing with water, one eating stones.  Eek!

“If you saw my own kitchen – and the bedrooms.  But that’s not the important stuff.  I’ll get home now sure, and it’ll get done – this dip will give me the energy for all that.  But that stuff isn’t important”.

Ain’t that the truth.

I told my husband the story when I got home and showed him the photos of the very happy day we had.  He’s now determined to make me into a swimmer.

Eh, we went to the beach today and we survived!  One step at a time Al… 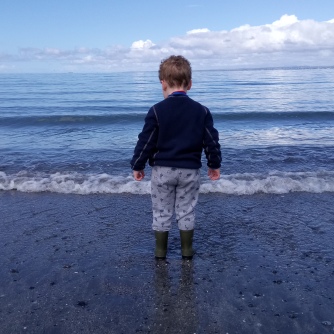